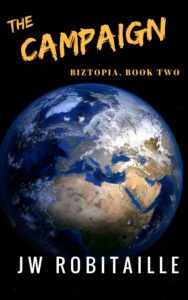 Jason and his band of Argonauts arrive in New York City under the protection of Nick Starvos, a wealthy ally of Olympia Rainier, only to be blindsided by accusations of immorality on a television talk show. Can Jason overcome political threats and win over the hearts of the people? To do so, they must neutralize the Wellbeing in the water and create a media campaign to convince people to challenge the government. Jason becomes the spokesman for the new Earth Party, and when his popularity swells, Olympia’s old political adversary, Luke Neil, decides to hedge his bets and support him. Will Jason be seduced by Neil’s flattery and the temptation to power, or will he remain true to his beliefs? Political intrigue abounds as Jason and his campaigners try to change the system.

Read the first chapter of the book here

The book will soon be available in ebook and print formats.