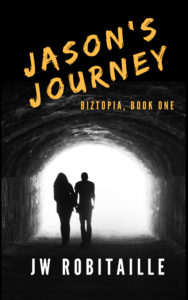 He’s a young man trying to make his way home after being fired. Could he be destined to lead the fight to save the world from environmental disaster?

Jason Evans knows he should be happy with his job in a protected factory city, but he is haunted by memories of a time before the Violence when he was happy. When a cafeteria worker who was once head of the Innovation Institute, gives him a straw to filter out Wellbeing, his troubles begin in earnest. When he makes a suggestion to improve factory morale, he is fired and must make his way home through a dangerous world, discovering along the way that there is a bounty on his head. Who would want him dead and why?

As Jason evades would-be assailants on his way home, he witnesses the many ways people survive in the Dark Zones, and he meets women who offer an alternative vision of cooperation and community amidst the chaos. When he teams up with Raina Baker-Campos, an orphaned computer genius, they both become the target of a Ranger who believes he is tracking terrorists. Can they stay one step ahead of their tracker long enough to lead a fight to save the world?

The book will soon be available in ebook and print formats.