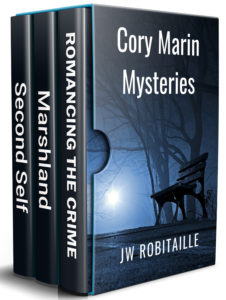 Romancing the Crime
“Compares favorably to Harlan Coben.” Amazon Reviewer
“A fast-paced book that kept me wound up tighter than a drum all the way through.” Amazon Reviewer
Sgt. Cory Marin, head of homicide, has her hands full. Not everyone on her squad is happy she’s in charge, she’s still dealing with the break up of her marriage, and wealthy residents are up in arms over the murder of a young professor in broad daylight in Ravine Creek, a proposed city park where she jogs every day. Cory is convinced that what appears to be a random robbery gone wrong is premeditated murder. Her job is complicated by the appearance of Fletcher Manning, a bestselling novelist who shadows her as research for a female detective novel he is writing. She has her guard up, but as she gets to know him, she softens and begins to fall for him.
Marshland
“Marshland is fantastic sequel to Romancing the Crime. Cory Marin returns as the strong female lead detective whose instinct and tenacity make the novel a page-turner. The novel contains all new mysteries, twists and turns but with the same likable cast of characters and dialogue. This is shaping up to be a great female detective series.” Amazon Reviewer
“Great character development that makes you feel like you know each of them. Intrigue and suspense abound and twists and turns keep you turning the pages. Wonderful book- fun read!! Love it!!” Amazon Reviewer
Sergeant Cory Marin and Detective Washington investigate the overdose death of a college student and find that everyone involved is lying or has something to hide. The more questions they ask, the more they suspect something very bad has happened. When the corpse of a young man is found in a swamp, their suspicions are confirmed. Their investigation leads them to the creeks and marshes of the Gulf coast, a land of small towns, fishermen, and smugglers, and they discover a subculture of drug importers, dealers, and users, a world dominated by greed.
As Cory struggles to untangle a story of innocence gone awry, she wades through an emotional marshland of her own as she adjusts to the idea that she will be a mother herself. How can she protect her child from the dangers he or she will face?
With so much in flux in her life, her partnership with Washington provides a stabilizing influence, but as their friendship deepens, her feelings for him threaten to upset the fragile stability of her world.
Second Self
“I have read all three books in this series and this is my favorite. I could not put it down. Great summer reading!” Amazon Reviewer
“Once again JW Robitaille has written a fast-paced, can’t put it down police procedural featuring Cory Marin, her tough Latina detective, who is holding her own in a southern police department in a university town. There is nothing more fun than a new Cory Marin novel. Highly recommended!” Amazon Reviewer
When Sergeant Cory Marin and Marty Washington begin to investigate the ritualistic murder of an international student, the leads and suspects keep multiplying. Is the killing tied to a similar one twenty years ago? Is the girlfriend’s possessive ex-boyfriend responsible? Do the victim’s fraternity brothers have a reason to want him dead? Or are the victim’s girlfriend or best friend involved?
When they discover a tie-in with the virtual world, Second Life, events take a bizarre twist. As her avatar tracks down leads in Second Life, Cory is faced with a new threat from Fletcher Manning. Luckily, she has Marty Washington, and her father, Jack Riley, in her corner, but can they protect her from Fletcher?

Buy the book now in ebook or print formats.